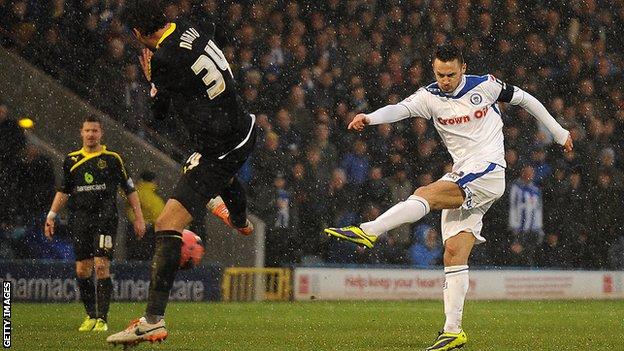 Rochdale will concentrate all of their efforts on winning promotion following their FA Cup exit, says Michael Rose.

Dale's run ended with a at Spotland on Saturday.

"That's our only focus left now and has been our main focus from the start," he told BBC Radio Manchester.

The 31-year-old, who scored Rochdale's goal in the 2-1 loss to the Owls, continued: "Saturday was a bonus game but it was one we wanted to win. Unfortunately we've not done that but hopefully we can take it [the performance] into Tuesday night at Northampton."

Rose's long-range effort on the hour mark brought Dale back into the match after Joe Mattock and Oguchi Onyewu had given Stuart Gray's men a 2-0 lead.

"The lads are really disappointed, more so with conceding the goals in the manner that we did," added Rose. "Not concentrating from set-plays, against a big side like that, you're going to concede goals.

"We were down and out, but we got a goal back and had a good go, so we feel slightly unlucky in the end."

Manager Hill hopes Rochdale's FA Cup run, the club's best in the competition since reaching the fifth round in 2003, will be enough to inspire his players in the closing weeks of the season.

"Our season's really alive," he said. "We could have been going out of the FA Cup with us in mid-table or fighting relegation, but we're in a great position in the league and we've got a lot to achieve.

"We've got 19 cup finals - they're our real cup finals. There's magic in every one of those games for us because we can really achieve something this season."