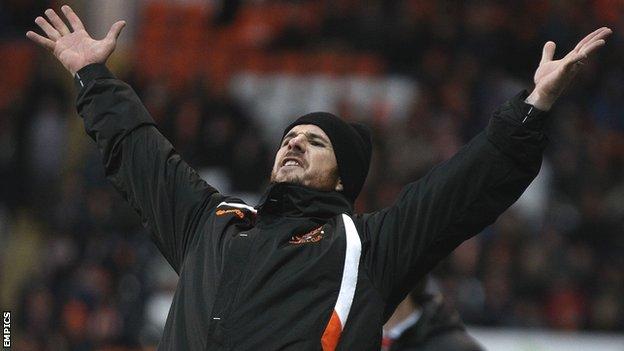 Blackpool caretaker manager Barry Ferguson is unsure how long he will be in charge of the side.

Paul Ince was sacked on Tuesday and Ferguson has since taken training, as well as leading the side in Saturday's Championship draw against Doncaster.

"As it stands, I am still a player," Ferguson told BBC Radio Lancashire.

"I was more than happy to take over for a few days and I have loved every single minute of it. The response I got from the players was great."

The Seasiders thought they were on their way to picking up their first win since 30 November when new loan signing Andy Halliday netted in the second half, but Billy Sharp struck for Doncaster with five minutes remaining.

I was getting a bit excited, I forgot I wasn't playing and kept coming out of my technical area. The fourth official grabbed me about 10 times

Despite the point, Blackpool have not won in 11 games, a run that led to the sacking of former England international Ince.

Midfielder Ferguson, who has been put in temporary charge, relished the opportunity of taking control of a team for the first time.

"I have done my coaching badges but it a new experience for me," he said. "It was a whole different ball game taking a team and I was in a difficult situation because they are all my mates in that dressing room.

"I got asked to do a job and the way they have responded to me, I can't have asked for any more."

Known as a combative player in the middle of the park, former Scotland international Ferguson says he will transfer his on-field characteristics off-field.

"After that performance, I won't get back into the team - but that doesn't bother me," added Ferguson.

"I was getting a bit excited, I forgot I wasn't playing and kept coming out of my technical area.

"The fourth official grabbed me about 10 times. I am a committed guy, that is the way I played and that is how I will be as a manager."