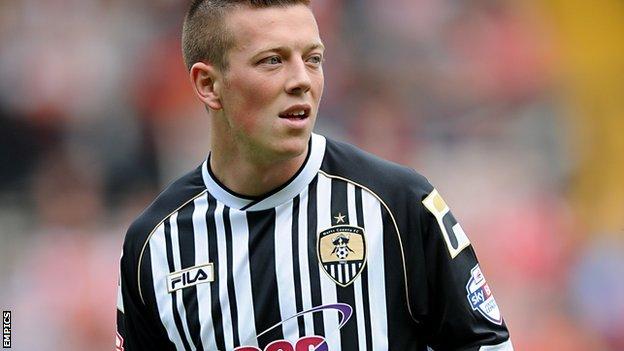 On-loan Celtic midfielder Callum McGregor said adding to his goalscoring form for Notts County is all he considered doing during protracted negotiations about his future.

He started his second spell with Notts by netting his 13th goal of the season in Saturday's 5-1 loss to Walsall.

McGregor missed three games while a new loan agreement was being reached.

Too little, too late

Callum McGregor's 13th goal of the season for Notts County was no more than a consolation for the hosts, as Walsall were already 5-0 up when he struck with a free-kick on 61 minutes.

"I'm determined to make up for lost time and score a few more goals," the 20-year-old told BBC Radio Nottingham.

"I've had a great six months here. Everybody at the club has been excellent with me. I was enjoying my football as well, so I was determined to get back to try and keep that run going.

"It's been a tough month and I just tried to keep myself training, keep myself fit and hoped a deal went through."

The Scotland Under-21 international said he was aware that other clubs, including League One rivals Wolves, were interested in him, but insists he only envisioned returning to Meadow Lane.

"There was speculation about me going elsewhere, but for me I wanted to stay here and see out the season with Notts County because I was going so well," he said.

"There is nothing better as a player than when you are doing well and scoring goals - all you really want to do is keep that going."