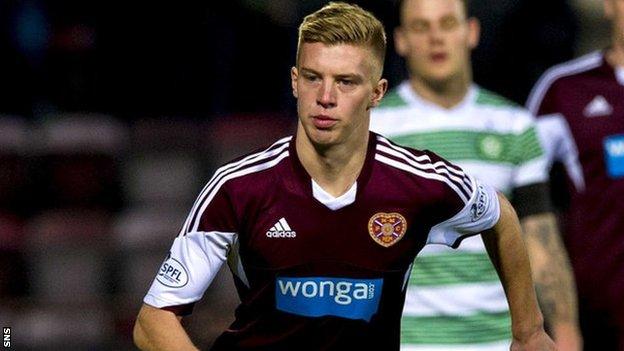 Hearts are attempting to bring in an under-21 striker as a replacement for Adam King, who has moved to Swansea.

Manager Gary Locke says the Tynecastle club has a number of potential players under consideration.

If a deal can be completed any new signing could make his debut in Sunday's League Cup semi-final against Inverness Caledonian Thistle.

King, 18, started only two matches for Hearts and the transfer will net the administration-hit club £150,000.

Locke also confirmed that the club hopes to sign Rudi Skacel for a third time next week if the Scottish Professional Football League board grants permission.

However, for that to happen they would need the SPFL board to discuss the matter before the weekend.

The move for Skacel came after the club cancelled the playing contract of goalkeeping coach Alan Combe.

The 34-year-old former Czech Republic international who has had two spells with Hearts, is a free agent after leaving Slavia Prague.

He has been training with the Edinburgh club, who are subject to a signing embargo because of their insolvency event.

However, the Scottish Professional Football League will consider requests to sign players on a one-in, one-out basis.

But, with the Scottish Football Association also imposing transfer restrictions on Hearts until 1 February, there is no prospect of Skacel joining in time for Sunday's League Cup semi-final against Inverness CT at Easter Road.

The SFA embargo does not apply to players under the age of 21, so that could happen before the weekend, if the SPFL rule favourably on any approach.