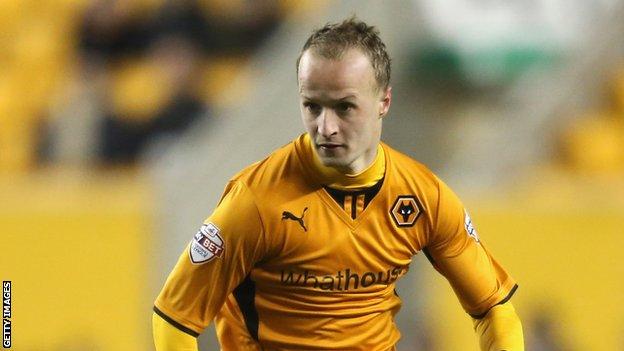 Celtic will continue their pursuit of Leigh Griffiths despite Wolves confirming they have rejected an offer for the Scotland striker.

The Scottish champions' manager, Neil Lennon, said: "We will see if we can get a deal thrashed out.

"We have made our intentions clear and the talks will keep going now for however length of time it takes to get a resolution one way or another."

Lennon said he had "no idea" how far the clubs were apart in valuation.

"We've got other irons in the fire and it's not guaranteed that a deal will get done here anyway," he said.

Griffiths moved to Wolves from Dundee in August 2011 but spent most of the next two seasons on loan at Hibernian.

However, the 23-year-old has scored 13 goals in 32 appearances for the English League One outfit this season.

Leigh has gone public to say he is interested in the Celtic situation, as most Scottish lads would be when a club of that size come in

Jackett said Griffiths had been informed and had "made public his fondness for Celtic" but stressed: "He's fully committed to Wolves as well and, until anything is accepted and does happen, he's part of a group chasing the top two.

"We do understand every player has their price, but we are not desperate to sell players here."

Wolves have signed Nouha Dicko from Wigan Athletic and the French striker scored in his debut as but Jackett insists that Griffiths remains part of his plans.

"Leigh has gone public to say he is interested in the Celtic situation, as most Scottish lads would be when a club of that size come in," he added.

"But the deal would have to be right for us and we will have to see how it goes.

"If not, Leigh is still part of our squad and is with us for Oldham tomorrow and Bradford on Saturday."

Griffiths started his career at Livingston, scoring 24 goals in 52 appearances before moving to Dundee, where he scored 29 goals in 56 games.

He was signed by Wolves in 2011 but then went out on two long periods on loan at Hibernian, scoring 39 goals for the Edinburgh club in 78 appearances across two seasons.