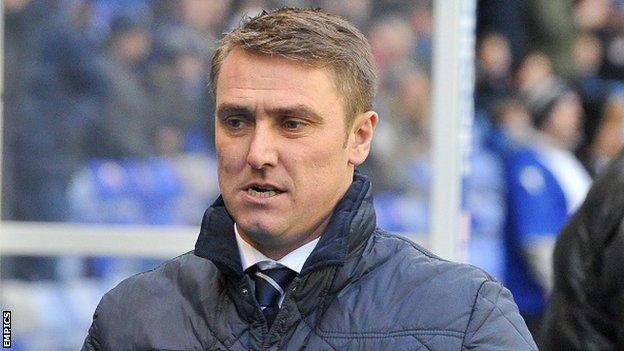 Manager Lee Clark has promised Birmingham City will "go for the jugular" against league leaders Leicester City on Tuesday.

Clark believes his young side can end Leicester's run of seven consecutive wins after impressing in defeat by Premier League Swansea in the FA Cup.

He told BBC WM: "There are a lot of positives to take from the game.

We're going to go for the jugular. We don't fear Leicester, we respect them, because I think we can beat them

"If we play the way we are, and be a bit more solid and not so open without the ball, we can beat Leicester."

Clark continued: "We gave them a game at their place earlier this season and got done with a dubious penalty, in my opinion.

"They won't underestimate us. They're really going well, seven league wins on the bounce should make them confident, but [Leicester manager] Nigel Pearson will know our team will be right up for it.

"When we've played teams portrayed as being better than us, individually and collectively, my players seem to raise their game - and I'm hoping that'll be the case.

"We're going to go for the jugular. We don't fear them, we respect them, because I think we can beat them."

Clark is anticipating a hectic week off the field before the transfer window closes on Friday evening.

"There could be lots going on, in and out," he added. "We have to be decisive this week - I have to nail down what I'm finally going to do.

"It's been a really tough couple of weeks because I'm limited to the loans I can bring in and use, and from week to week my priorities are changing, but this week I have to be decisive.

"We've had one or two enquiries about players I would be prepared to move on, and there's been one or two phone calls I didn't want to take and which I hope don't happen."