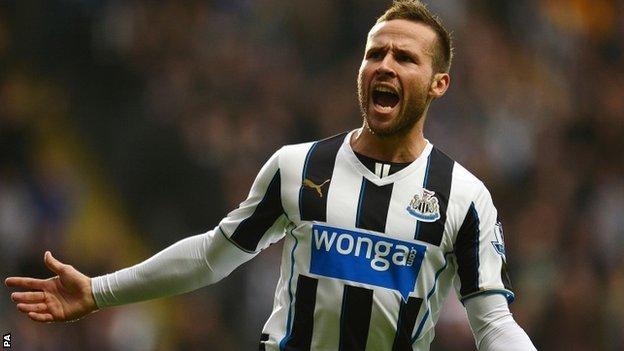 Newcastle and Paris St-Germain have agreed a fee of around £20m for France midfielder Yohan Cabaye.

The French champions had a £14m bid for the 28-year-old, who joined the Magpies in 2011, rejected on Sunday.

Cabaye, who has scored 17 goals in 79 appearances for the Magpies, will fly to Paris for a medical on Tuesday and will not play a part in Newcastle's Premier League game with Norwich.

Newcastle boss Alan Pardew said earlier on Monday that he could not guarantee that the former Lille player, who joined the Tyneside club for £4.3m in June 2011, will remain at St James' Park beyond the end of the month.

Cabaye in the Premier League

Cabaye refused to play for Newcastle in August after they rejected a £10m offer from Arsenal, but later apologised to Magpies fans and in September insisted he was "happy" at the Premier League club.

However, Cabaye has continued to be linked with a move away from Newcastle before the transfer deadline on 31 January.

Paris St-Germain are the current French Ligue 1 leaders, three points clear of AS Monaco, and will face Bayer Leverkusen in the last 16 of this season's Champions League.