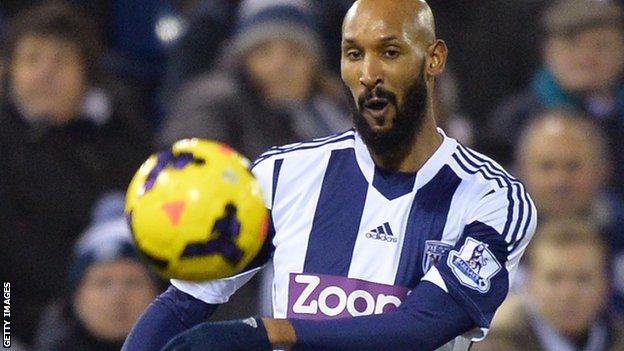 Nicolas Anelka will not walk out on West Brom despite being charged by the Football Association for performing the controversial 'quenelle' gesture.

The 34-year-old striker has been linked with a move to Italian side Lazio, but the Frenchman tweeted: "Why should I leave my club and England?

"I'm happy here and I did nothing wrong. Now it is time to stay focused on my football with my club."

If found guilty of an "abusive" sign, Anelka faces a minimum five-match ban.

The former France international denies the FA charge and has requested a personal hearing.

He claimed his action was designed purely as a show of support for controversial French comedian Dieudonne M'bala M'bala and suggested the salute could be perceived as "anti-establishment", rather than discriminatory.

The FA alleges the gesture was abusive, indecent, insulting or improper and also claim his conduct represented an aggravated breach, in that it included a reference to ethnic origin, race, religion or belief.

Anelka, whose contract with the Baggies expires in the summer, made the gesture, which some believe is anti-Semitic, during the 3-3 Premier League draw at West Ham in December.

West Brom have asked him not to repeat the celebration but say he will continue to remain available for selection until his hearing, which is not likely to begin until the end of February.