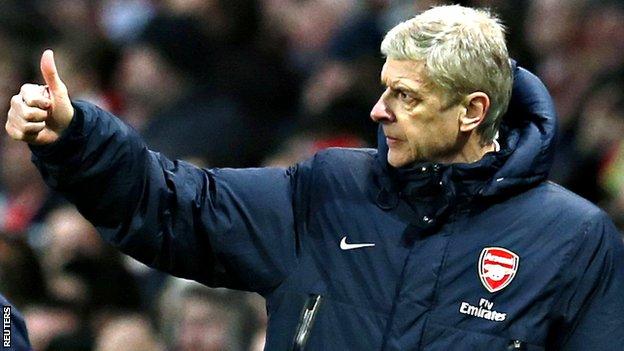 Arsenal boss Arsene Wenger is to extend his contract with the Gunners, according to chief executive Ivan Gazidis.

The Premier League's longest-serving manager, Wenger is in the final 12 months of his current contract at the north London club.

"Arsene will be extending [his stay] with us and at the right time we will make that announcement," said Gazidis.

The announcement was made on the same day the Gunners revealed a new multi-million pound kit deal with German company Puma.

Last year Gazidis spoke about formalising an extension for his manager, but the move was greeted with protests from some supporters, with the Arsenal Supporters' Trust calling it "inappropriate".

At that time, Arsenal had yet to spend during the 2013 summer transfer window and Wenger's side had slumped to a 3-1 defeat at home to Aston Villa on the opening day of the new season.

However, the Gunners have enjoyed a strong 2013-14 campaign so far and currently sit top of the Premier League by a point, with a goal difference of plus 24 and having won seven of their last 10 games.

In Wenger's 18 years in charge, Arsenal have won three Premier League titles, four FA Cups and four Community Shields, though they have not lifted a major domestic trophy since 2005.