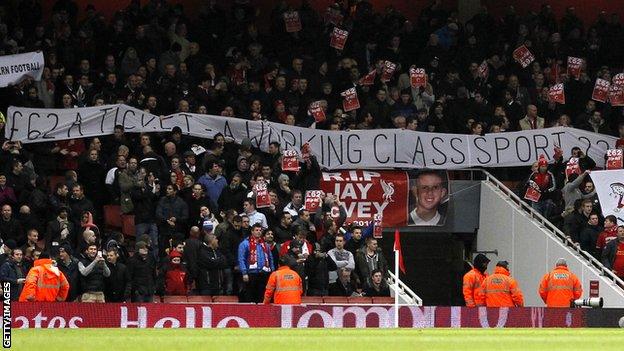 A Liverpool supporters' group has called for a reduction in ticket prices when their side plays at Arsenal in the FA Cup next month.

Spirit of Shankly have written to both clubs citing prices of £62 to £93 for travelling fans when the Reds lost 2-0 at the Emirates in November.

Arsenal have said discussion on ticket pricing are ongoing.

In January 2013, Liverpool supporters held up banners inside the Emirates protesting about the cost of attending the match.

"The [November] league game saw Liverpool fans charged £62 per ticket for a fixture played on a Saturday evening," Spirit of Shankly said on Monday.

"The cost of the match along with the late kick-off saw many fans priced out and for those who went there were many difficulties using public transport to get home."

The supporters' group suggest that prices should match those for Coventry City fans in the previous round of the competition, who they say paid £25.50 per ticket.

But an Arsenal spokesperson told BBC Sport the FA Cup fifth round clash between the two sides would almost certainly be classed as a Category A or B match, with a lowest potential ticket price of £35.

The club added they hoped to decide prices by the end of this month, while confirmation of kick-off times and away supporters' allocation would follow soon after.