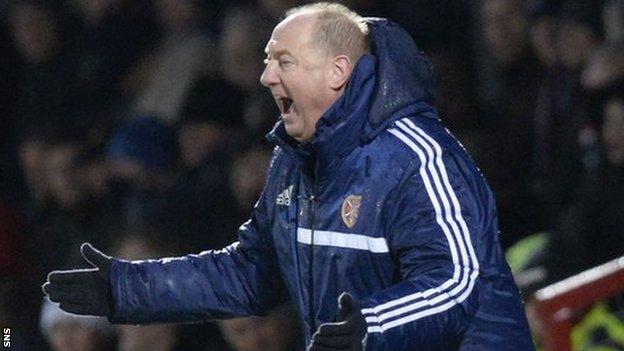 Billy Brown has been handed a further reprieve as Hearts' assistant manager after the 63-year-old's contract was extended by a month.

He was initially told the 18 January clash against St Johnstone would be his final match and that his contract would not be renewed.

But the day after the Perth encounter, the club's administrator announced a two-week reprieve for Brown.

Now he will remain for Hearts' League Cup semi-final on 2 February.

A BDO statement said: "The administrators of Heart of Midlothian FC have extended the contract of assistant manager Billy Brown to the end of February.

"This will allow him to assist manager Gary Locke with the 2 February League Cup fixture.

"It makes sense to offer Billy an extension of a month on his contract to cover this crucial fixture."

The initial decision to dispense with Brown's services was followed by news that managing director David Southern and director of football John Murray had agreed to take a pay cut.

However, following talks with a delegation of Hearts players, it was announced that Brown would stay on until his contract expired at the end of January.

Following a further extension, Brown will be in the dugout for Sunday's League Cup semi-final against Inverness Caledonian Thistle at Easter Road.

He had initially worked on a voluntary basis when he rejoined Hearts for a third coaching spell in the summer before being handed a short-term contract in September.

The new one-month deal will allow the prospective owners, Foundation of Hearts, to decide on Brown's future if and when their protracted takeover is completed.