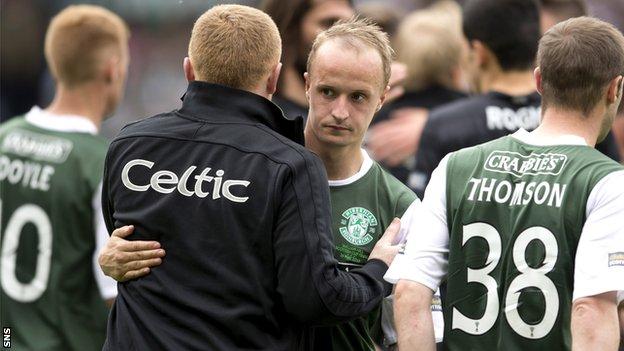 Neil Lennon has backed Leigh Griffiths to make the transition from England's League One to the Champions League should he move to Celtic from Wolves.

"Scott McDonald came from Motherwell a few years ago and scored a huge amount of goals," said Celtic manager Lennon.

"And he went on to score in Europe as well and I think Leigh can do the same."

I think there's scope for him to get better. He knows the environment and I think, if he comes here, we can improve him

Lennon said he was unaware that some Celtic fans on social media sites had questioned Griffiths' ability to make an impact in Europe.

"I beg to differ," said Lennon. "We feel he's a good player and I think he'll do very well here if he does come in.

"People would have said when we brought Gary Hooper in that they hadn't heard of him.

"They hadn't heard of Victor Wanyama and Emilio Izaguirre and people like that.

"They all did it. We believe that Leigh, if he comes here, can play at this level comfortably and, at his age, there's a good five or six years for him to improve and get to his peak."

However, he has not been a regular starter in recent weeks and Wolves have just

"I think he had a fantastic season last year," said Lennon of a player who hit the net 28 times last term for Hibs. "I think he's improved as a player.

"I think there's scope for him to get better. He knows the environment and I think, if he comes here, we can improve him.

"I thought he had a great season last year and I think it's not just his goals - I think he can see a pass, I think his movement is very, very good, I think he's got physically stronger, he's got pace about him as well, he's broken into the Scotland squad.

"I think he'll improve here with the players around him."

Lennon brushed aside suggestions that Griffiths would arrive with a reputation for having problems in his personal life.

"We all have issues away from football and we're not going to touch on those because i don't know the ins and outs of them," said Lennon.

"What I see is what I see on the pitch. If there's difficulties then we'll help him and we'll manage him.

"But he's a good player and I think he'll come here and make us better."

Meanwhile, Lennon was pleased that the transfer window was nearing a close without any bids for his top performers, such as

"We would not be encouraging any bids," he added. "I would like to make it as plain as possible - these players are not for sale."

"We don't need to sell and don't want to sell."