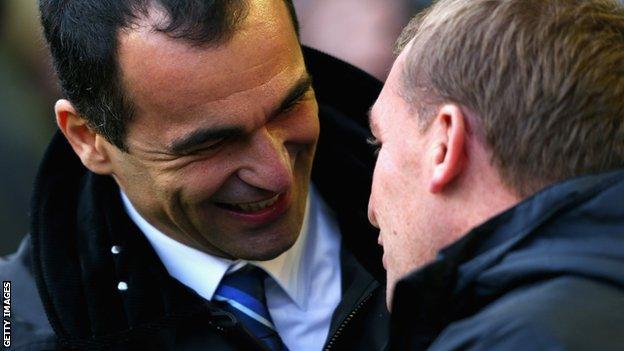 Roberto Martinez's men go into the game sixth in the Premier League, one point adrift of their fourth-placed rivals.

The Toffees have lost just one of their past 17 games, a run including a 3-3 draw at home to their city rivals.

Read more about that game

The Reds needed a late Daniel Sturridge goal to snatch a point at Goodison in November, and Fowler thinks Everton's new approach under Martinez makes the Merseyside derby a more attractive prospect.

"The way Everton play now, they're more of a footballing side. They used to go to Anfield, sit players behind the ball, everyone working hard.

"It'll be interesting to look at what both teams do with their formations."

The Spaniard said: "Psychologically you have to have that winning mentality.

"This season we have been tested in that respect - going to the Emirates and being able to perform how we did, and going to Old Trafford and winning after 21 years means as a group we are ready to go anywhere and be ourselves."

"There are still going to be quality players involved and the footballing ideas of both teams will come out," he said.

"But it is unfortunate a number of players are out of the game, a lot of them starting players - it would've made it a different game."