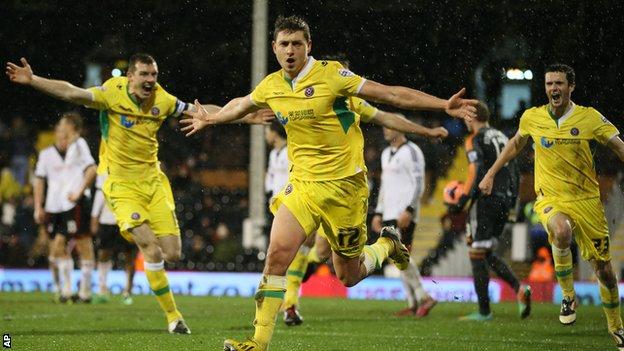 Fulham's miserable season continued as they were knocked out of the FA Cup in extra time by League One Sheffield United.

Fulham barely threatened, with Bob Harris's free-kick going narrowly over for the Blades, who left it until the 119th minute to seal victory.

Magic of the cup

Before beating Fulham, Sheffield United had won just one of their last five competitive away games - that win coming in the FA Cup third round at Aston Villa

After slumping to the bottom of the Premier League table last weekend, the Cottagers' misery was extended following a lacklustre display against opponents stuck in the relegation zone two divisions below them.

Both managers named much-changed sides, with the Blades edging a turgid affair early on as John Brayford fired narrowly over after picking up a loose ball, before Murphy directed a header wide.

There was little entertainment to be found after the interval either with Harris, who had survived claims for a second booking for a late tackle on Josh Passley, curling over from a set-piece.

The first meeting was drawn 1-1, and it seemed nothing was going to separate the teams as the tie edged towards a penalty shootout - Brayford and Fulham's Pajtim Kasami failing in their attempts to break the deadlock in extra time.

Instead, Miller stooped to flick in Harry Maguire's towering header from a corner in the final seconds to embarrass the Cottagers and secure Nigel Clough's side a meeting with Preston North End or Nottingham Forest in the next round.