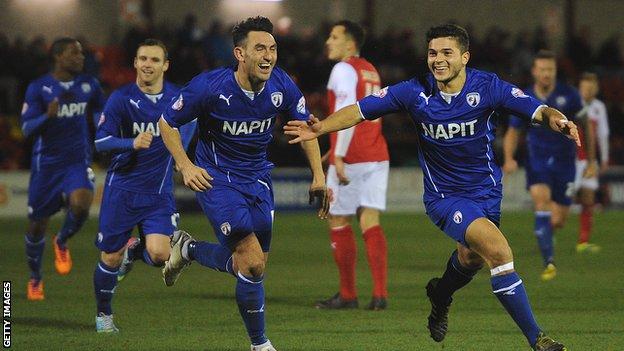 Ian Evatt poked in Gary Roberts' free-kick from close range and Sam Morsy quickly doubled Chesterfield's lead with a shot from the edge of the box.

But Jimmy Ryan struck from 25 yards to give Chesterfield, a commanding lead in the tie.

Fleetwood, with a strong wind at their backs in the first half, had the better of the opening exchanges.

Fleetwood, playing in the Football League Trophy for only the second time in their history, have defeated four League One clubs - Tranmere, Crewe, Carlisle and Rotherham - to reach the northern area final

Chesterfield's opener came against the run of play, with Spireites captain Evatt scoring for the first time since April 2012.

It was soon 2-0 to the League Two leaders when some hesitant Fleetwood defending let in Ollie Banks and, although goalkeeper Scott Davies kept out his close-range effort, midfielder Morsy fired in the rebound for his second goal in two matches.

The misery continued for Fleetwood as the hosts had another goal disallowed before the break - the officials ruling that veteran striker Jon Parkin had been in an offside position as Mark Roberts' hooked attempt trickled over the line.

A quiet second period was brought to life by Ryan, who controlled neatly before firing in a powerful half-volley past the helpless Davies.

A Gareth Evans shot, well saved by Tommy Lee, was the closest Fleetwood came to salvaging something from a disappointing night.

With a two-goal advantage to take into the second leg in a fortnight's time, Paul Cook's side will be strong favourites to progress to the final at Wembley on 30 March.

VIEW FROM THE DRESSING ROOMS

"They've scored two goals in four minutes from nothing - one free-kick that wasn't a free-kick and a straight ball up the pitch that we haven't dealt with.

"The response from the players was fantastic, and then in the second half their lad has scored a wonder goal, but it's from another throw-in that we've given away.

"If you take the goals out of it, we haven't done much wrong, but I've been in the game a long time and goals are what the game is about.

"I still don't think the tie's over. We could have been 2-0 up by the time they scored their first goal. We know we're more than a match for Chesterfield."