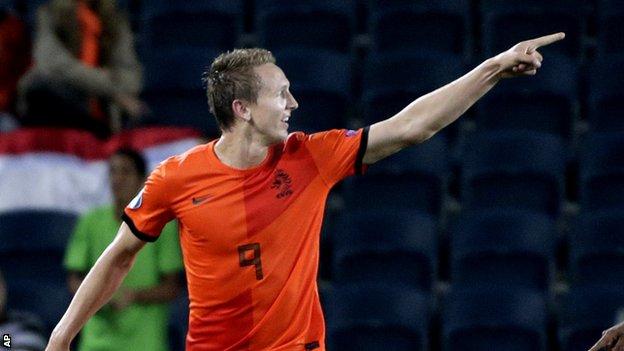 The Netherlands international, 23, passed his medical on Wednesday and will remain with the Magpies for the rest of the season.

De Jong joined Monchengladbach for a reported £12.6m two years ago, after scoring 45 goals in 86 games for Dutch Eredivisie side FC Twente.

But he has found the net just six times in the Bundesliga.

"It has been a tough season for me so far but I am here to play games and want to be important for the team, and successful with goals and assists," said De Jong, who will wear the number 18 shirt.

"I am really looking forward to playing for Newcastle."

The Dutchman, who has won seven caps, could make his debut in Saturday's Tyne-Wear derby against Premier League rivals Sunderland.

His arrival was announced shortly after the sale of midfielder Yohan Cabaye to Paris St-Germain for £19m was confirmed.

As they seek a replacement, the Magpies have made a bid for Lyon's 23-year-old France international Clement Grenier, who has scored 12 goals in 89 appearances for the Ligue 1 club.