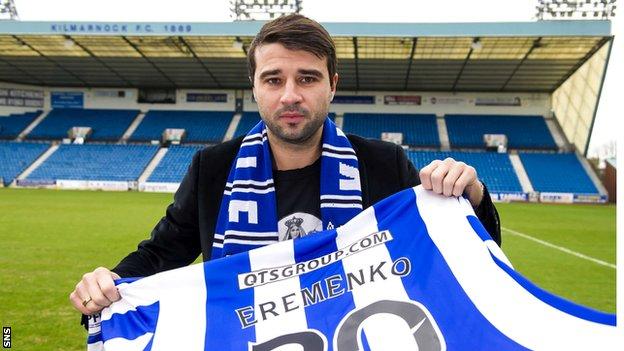 The Rugby Park side announced the signing of the midfielder for a second time until the end of the season.

"I don't think I played against Kris when he was at Rangers the last time I was here," said Eremenko.

"But I watched Saturday's game with Inverness and I think I can make him score even more goals."

The Finland international, 30, who was with Kairat Almaty, spent season 2010-11 on loan at Killie from Metalist Kharkiv and has 59 caps and 14 goals for his country.

It feels great to be back at Kilmarnock. When I left the club, I told the club secretary Kirsten Callaghan that I would be back one day but I didn't expect to be back so soon

"I need to work hard to get my fitness back and hopefully I should be back fit for the Dundee United game in two-and-a-half weeks," said Eremenko.

"But it feels great to be back at Kilmarnock. When I left the club, I told the club secretary Kirsten Callaghan that I would be back one day but I didn't expect to be back so soon.

"I was gone for three years but my memories of playing here were always with me.

Boyd has scored 13 goals for Kilmarnock this season and has attracted interest from Championship side Blackpool, but chairman Michael Johnston insists he wants to see the frontman and Eremenko link up for Killie.

"A bid for Kris is not something that we would welcome," said Johnstone.

"Indeed we would hope Kris would be here for the long term. He is only signed until the end of this season but it our wish he would stay on beyond that.

"We are looking forward to seeing him play in conjunction with Alexei, it should be an interesting pairing and hopefully will be very fruitful.

"It's not part of our planning that Kris will be leaving. He is very settled with the club.

"There is no suggestion from him that he wants to leave and there is certainly no desire on the part of the club to allow him to go, so the dream team of Alexei and Kris is what we are looking forward to seeing on the pitch."

Manager Allan Johnston was unsure whether Eremenko will be fit enough to feature against Celtic in Wednesday night's league encounter in Glasgow, but hopes to have him available as soon as possible.

"He will give us another dimension going forward," said Johnston.

"It might take him a while to get fit because he has not played since the start of November, but as long as we get him up to match speed his quality should start to count."

Eremenko joined Kairat Almaty on a free transfer from Rubin Kazan last year and his original spell at Rugby Park was under Mixu Paatelainen during a loan period from Metalist Kharkiv in 2010, when he featured over 30 times for the Ayrshire side.

Paatelainen, now manager of Finland, told BBC Scotland's Sportsound programme that while Eremenko had not featured for the national side for almost a year, he was certain a return to Scottish football would improve the player's chances of a call-up.

"The last match be played for us was against Israel, last February," said Paatelainen.

"That was his last match with us. He was involved in a training camp at the end of May, but since then, he's not been involved.

"But there's question of him not having the quality and being over-the-hill. There's no question of that. He's a player who can make things happen.

"So, hopefully, he'll do well for Kilmarnock and obviously he will be very close to getting back into the Finland squad again.

"The national team is not beyond him at all, he's got the quality, he's got the ability and as long as he's fit and playing regularly, he'll be there."