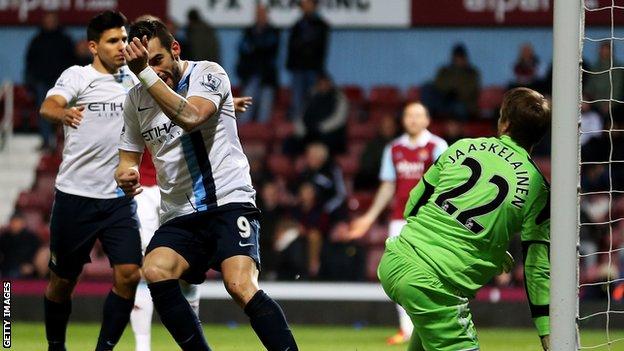 Manchester City striker Alvaro Negredo has recovered from a shoulder injury and is in the squad for Wednesday's Premier League game at Tottenham.

The striker, 28, was hurt late on in the Capital One Cup semi-final second-leg victory over West Ham United.

He then missed Saturday's FA Cup win over Watford, but manager Manuel Pellegrini said: "Negredo is in the squad [against Spurs] with no problem."

The £20m summer signing from Sevilla has scored 23 goals in 33 appearances.

He scored twice in the League Cup victory at Upton Park, adding to the hat-trick he scored in the first leg of the semi-final, and has been described as the nearest thing to an old-fashioned number nine that the Premier League has had since the retirement of Alan Shearer in 2006.