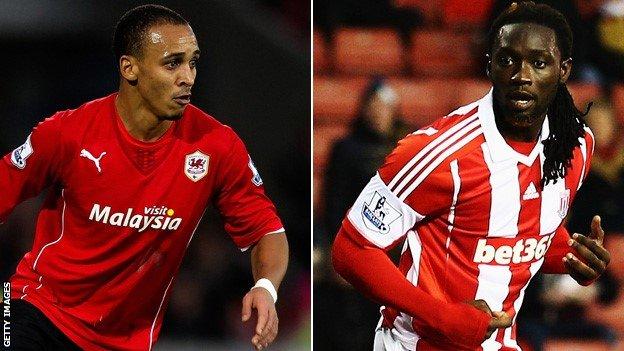 Cardiff forward Peter Odemwingie has joined Stoke in a swap deal that has seen Potters striker Kenwyne Jones sign for the Welsh club.

Nigeria international Odemwingie, 32, struggled at Cardiff after joining in the summer and was out of favour under new boss Ole Gunnar Solskjaer.

Trinidad and Tobago frontman Jones, 29, was frozen out at Stoke after refusing to play against Liverpool.

He added: "Things haven't perhaps gone as well for him at Cardiff as he would have hoped and he's really keen to start afresh with us."

Odemwingie has agreed an 18-month deal with the club, but Cardiff have not disclosed how long Jones has signed for.

Announcing the move on their website, Cardiff said Jones would be available for selection on Saturday, when the Bluebirds hosted Norwich.

Odemwingie, who scored just two goals in 17 matches for Cardiff following his £2m switch from West Brom, could feature for his new side in Wednesday's Premier League game at Sunderland.

Jones became Stoke's record signing in August 2010, when he joined from Sunderland for £8m, and scored 26 goals in 115 appearances.