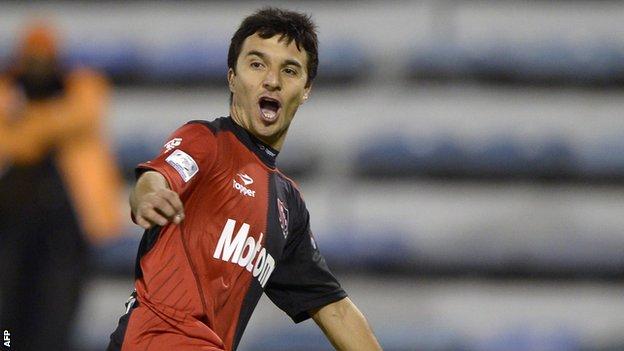 Sunderland have signed striker Ignacio Scocco on a two-and-a-half-year contract for an undisclosed fee.

The Argentina international, 28, joins from Brazilian side Internacional.

Compatriots Oscar Ustari and Santiago Vergini are already on Wearside, having been signed earlier this month.

Sunderland, who on Wednesday for the first time since August, have also recently signed defender Marcos Alonso on loan from Fiorentina.

Asked about Scocco in April, South American football expert Tim Vickery wrote in his weekly BBC Sport column: "He might not be a big target man centre-forward, but he has some penalty area presence and moves outside the area with fluidity and intelligence."

Scocco has only won one cap for his country so far, scoring twice against Brazil in an Americas Superclassic Cup match in November 2012, which ended 3-3 before Argentina lost on penalties.