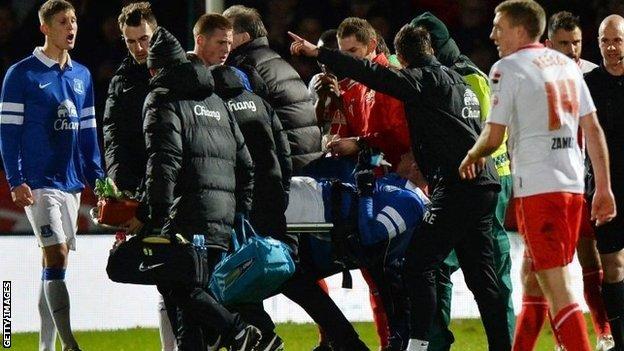 Everton midfielder Bryan Oviedo had a successful operation on his double leg break on Monday.

The Costa Rica international, 23, sustained the horrific injury during the 4-0 victory at Stevenage in the FA Cup fourth round on Saturday.

"Bryan's surgery was a big success and he is in a comfortable and stable condition," head of medical services Danny Donachie told the club website.

"A rod was put through his tibia, which means he will come back stronger."

Oviedo joined Everton from FC Copenhagen in August 2012 for £5m and has made 31 appearances for the Toffees, scoring twice - including the only goal against Manchester United in December.

Costa Rica are in the same World Cup group as England, Italy and Uruguay this summer.

Donachie added: "Sometimes when there are small fragments of bone in the area, it can be difficult to deal with.

"But these are clean breaks, so they will put the bones back into position and it will heal well from there.

"We will be working hard to get him back as quickly as we can."