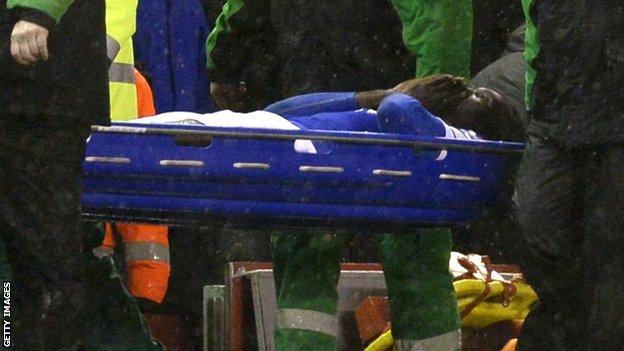 Everton striker Romelu Lukaku is to be out for "weeks rather than months" with the ankle injury he suffered against Liverpool, says Roberto Martinez.

Lukaku, 20, was carried off during the Toffees' 4-0 derby defeat at Anfield.

"There is no ligament damage and the injury is not as bad as we first thought," said manager Martinez.

The Belgium international was hurt as he tried to help his side defend Luis Suarez's 21st-minute corner which led to Steven Gerrard opening the scoring.

"There are moments in games that can be very painful and that was one of them," Martinez said immediately after Tuesday's match.

"Not only did we concede from a dead-ball situation, two of our players collided and Romelu got injured."

Daniel Sturridge then scored twice in three minutes before the break and Suarez added a fourth goal in the second half as Everton suffered their first defeat in seven games.

Lukaku has scored nine times since arriving at Goodison Park on loan from Chelsea at the end of last summer's transfer window.

Despite only being out for a shorter spell than first feared, the prognosis leaves Everton short of attacking options.

Arouna Kone is likely to miss the rest of the season because of a knee injury, while makeshift forward Steven Naismith has only scored once in 15 Premier League games this season and Gerard Deulofeu has not played since December.

Ivory Coast striker Lacina Traore, 23, is yet to feature since completing a loan move from Ligue 1 side Monaco on Friday.

Meanwhile, defender Sylvain Distin has signed a one-year contract extension to keep him at Goodison Park until the summer of 2015.