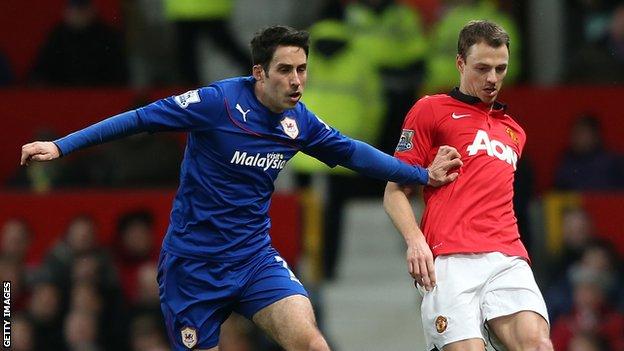 Peter Whittingham says Cardiff City can be encouraged ahead of a busy month despite the 2-0 defeat at Manchester United.

"There's a lot of positives but we need to start picking up points," he said.

"It's going to be a big month for us now. There's a lot of games coming up with teams in and around us.

"We have to stand up and be counted."

Ashley Young cracked in a superb 25-yard shot after the interval to secure victory for David Moyes's side.

"They scored early doors which hurt us a lot," Whittingham said.

"We knew they were going to start well and they did that and it was going to hamper us quite a bit.

"But I thought after that we acquitted ourselves well and I thought we had them rocking a bit just before their goal.

"But it's a great strike from Ashley Young and good players probably take their chances where we need to be a little more clinical and a little more astute."

After successive league defeats away to both Manchester clubs - City and United - Cardiff are home to Norwich City on Saturday followed by games against Swansea (away) and Aston Villa (home), all in the space of 10 days.

Whittingham says home form will be crucial in their bid to stay in the Premier League, starting against Chris Hughton's Canaries.

"It's always going to be crucial. We said that at the start of the season," he added.

"Saturday's no different. It's a huge game for us, there's no denying that. We need three points from it and the lads are looking forward to it.

"We'll probably take not playing too well and just get the three points. It's what we need to do."