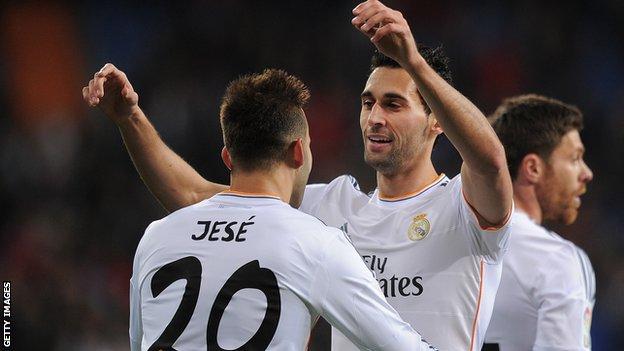 Real Madrid progressed to the semi-final of the Copa del Rey as they edged 10-man Espanyol at the Bernabeu for a 2-0 aggregate win.

Jese Rodriguez scored early in the first half, clipping a clinical effort past goalkeeper Kiko Casilla.

Real Madrid broke two records with the clean sheet. They have not conceded in eight games, and Iker Casillas has not let in a goal in 682 minutes - both club landmarks.

Real will play the winner of the quarter-final between defending champions Atletico Madrid and Athletic Bilbao.

Barcelona look certain to join Real in the semi-finals as they host Levante on Wednesday with a 4-1 lead from the first leg.