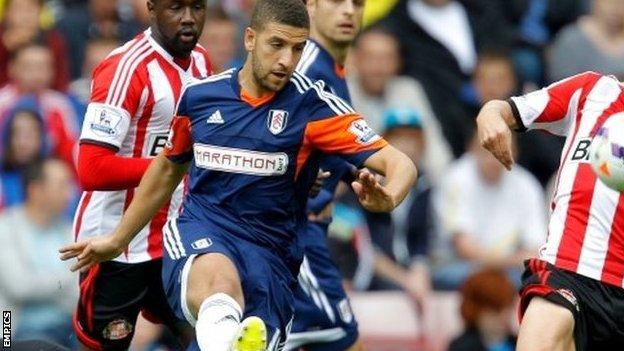 AC Milan have signed QPR midfielder Adel Taarabt on loan with a view to a permanent transfer in the summer.

The 24-year-old had been on loan at Premier League club Fulham since last summer but has now joined the Italian giants until the end of the season.

"I'm very happy to be here and it's an honour to play for the strongest team in Italy," Taarabt told AC Milan's official website.

Taarabt was not involved in Fulham's 2-0 league defeat at Swansea on Tuesday.

"We thought it would be a wise decision to not include him," Fulham manager Rene Meulensteen said.

Taarabt began his career at Lens before moving to Tottenham in 2007.

During his three years at White Hart Lane he had two loan spells at QPR before joining the Loftus Road club in a permanent deal in August 2010.

He helped the Hoops return to the Premier League in his first season, but could not prevent them from sliding back down at the end of the 2012-13 campaign.

He made seven Premier League starts for the Cottagers this season, and his only goal for the club came in a League Cup win at League Two Burton in August.