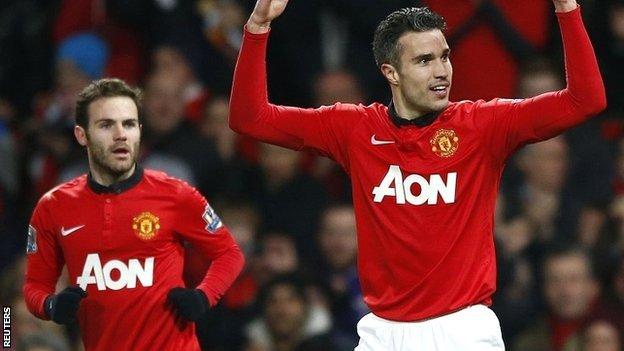 Manchester United boss David Moyes said the signing of Juan Mata and the return of Robin van Persie and Wayne Rooney has lifted the mood at Old Trafford.

Van Persie returned from an 11-match injury lay-off to score in a 2-0 win over Cardiff, while Mata shone on debut after his £37.1m move from Chelsea.

Rooney also came off the bench following a groin injury.

"Has my mood improved? Yes because I know that I have some really good players coming back," Moyes said.

Juan Mata made more passes [52] than any other Manchester United player on his debut, with a completion rate of 86.5%.

"But I still want to be more convincing. I want to win better and want to play much better so don't think because I've won tonight that that means that I've got a smile and I'm happy.

Victory lifted Manchester United closer to their rivals for a top-four spot, Everton and Tottenham, but they still lag six points behind fourth-placed Liverpool after Brendan Rodgers's side thrashed their Merseyside adversaries.

And Moyes admitted that the arrival of Mata, who received a standing ovation after he was substituted late on, will give him creative options in attack while boosting his team's form.

Prior to the win against Cardiff, where Ashley Young scored a fine goal, United had lost four of their last six matches, crashing out of both domestic cup competitions.

"Juan did really well. He made our best chances in the opening 30 minutes, so I was really pleased," Moyes added.

"I hope we play better with him in the side and hope we create more chances and play better especially at Old Trafford where for some reason, we have not just been able to take our opportunities."

Moyes also hoped the addition of Mata, Van Persie and Rooney - who had not played since 1 January - would boost the form of other players.

"The results with them in the team will be much better," Moyes said.

"We need to get them into the right physical condition to make that happen. They are all in need of match fitness but I was really pleased with them.

"I actually thought one or two others stood up. Ashley Young made a goal and scored a goal, and what I want is competition. If people play well, go and do it again next week, but I also need players who if we lose people to injury, can come in and keep the results going in the right direction."