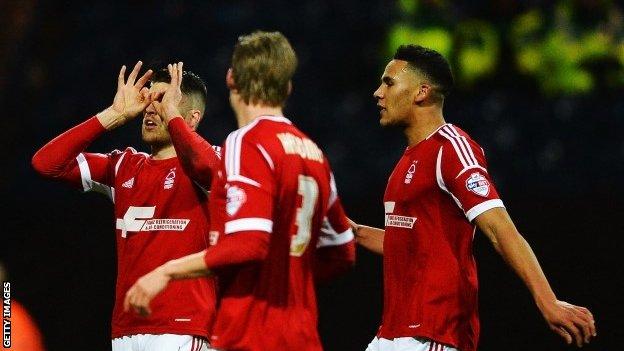 Mackie struck superbly from 20 yards during the first half at a sodden Deepdale.

It was the home team who had most of the pressure and Dorus De Vries saved from Kevin Davies and John Welsh, while Joe Garner hit the post.

Nottingham Forest will face their former forward Nigel Clough, who now manages Sheffield United, in the fifth round

Henderson struck on the break in the closing stages to seal the victory.

It means that in-form Forest are now unbeaten in 14 games - a sequence that stretches back to November - and can look forward to a fifth-round tie against Nigel Clough's Blades, who are struggling at the wrong end of League One.

Preston are pushing for promotion from the third tier and can take encouragement from a match that they dominated for long periods.

They went into the game with just one defeat in their last 10 matches and made a confident start despite the difficult conditions of wind and driving rain.

De Vries had to be alert to palm an inswinging corner clear of his goal and Lee Holmes went close with a curling effort.

But Mackie, a threat all evening down the right side, opened the scoring with the games first real moment of quality.

North End appeared to have successfully dealt with a Forest corner but Jamaal Lascelles laid the ball intelligently off to Mackie on the edge of the area and the Scotland international curled the ball into the top corner.

I think the best team lost. You've got to feel sorry for them because they deserved to win the match. End of

Undaunted, the home side continued to press and came close to equalising when veteran striker Davies - back in the side after serving a three-match suspension - connected with a low Holmes free-kick, but he was denied by a superb save from De Vries.

North End packed the midfield and at times overran Forest but even so the away side came close to a second when Simon Cox just failed to steer a teasing cross from Matt Derbyshire into the goal.

The replay lost some of its shape after the break but there were enough openings to keep both sets of fans entertained.

Davies failed to find the target with a header from a Keith Keane cross, Neil Kilkenny had a shot blocked and a penalty appeal for a handball against Greg Halford was turned down.

Forest had used all their substitutes with more than 20 minutes remaining but they could not stem the Preston pressure and a low strike from Scott Wiseman narrowly missed with the keeper beaten, while De Vries later denied John Welsh.

Garner was agonisingly close when his strike deflected off Lascelles and hit the woodwork but it was Henderson who struck the decisive second goal deep into injury-time with a strike from the edge of the area.

"We said to the players before they went out 'do yourself justice, do the club justice and put on a performance' and we certainly have done that tonight.

"Everybody saw the commitment, the effort, the quality. To limit such a strong, powerful team as Nottingham Forest to the number of chances they had and to create the chances we did.

"It was an understatement that it was daylight robbery today."

"I think the best team lost.

"On the night we didn't show enough quality, we didn't compete as well as the home team and you've got to feel sorry for them because they deserved to win the match. End of.

"It was a typical cup tie night of football, the rain was pouring down, the wind was blowing, the pitch was soggy and they handled it better."