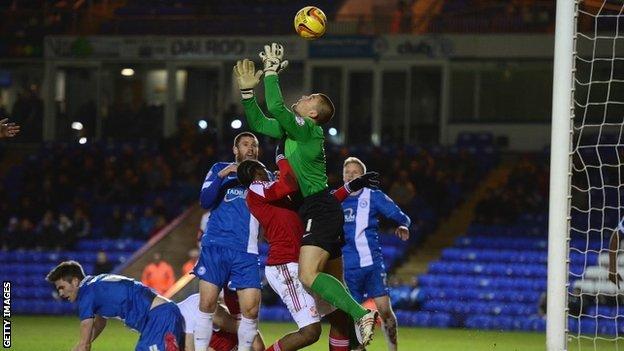 Ten-man Swindon Town fought back to draw with Peterborough United in the first leg of the Johnstone's Paint Trophy southern area final.

The Robins replied with Nile Ranger's cool finish and, although Jay McEveley was sent off for a high challenge on Britt Assombalonga, Shaun Brisley sliced a leveller into his own net.

Posh went close to a winner late on as Nat Knight-Percival headed over.

I can't keep wanting to score three goals to win a game. The goals we gave away were really poor

United and Town will be hoping this is not their only chance of reaching a Wembley final this season, with both teams loitering just outside the League One play-off places.

But there was little promotion-winning quality on show in windy conditions and on a sticky pitch that combined to contribute to an error-strewn game between two sides who have never won this competition.

Branco, under pressure from Brisley, deflected McCann's threatening corner into his own net from just a couple of yards, and then the Robins lacked conviction in trying to clear the ball as Vassell found the space to finish from the edge of the area.

Swindon were back in it after half an hour, with Ranger slotting past Robert Olejnik when put through by a tidy pass from Louis Thompson.

All that good work looked to be undone when McEveley saw red after his high boot caught Assombalonga in the face, doing enough damage to force the injured striker out of the game.

However, Mark Cooper's men levelled on the stroke of half-time courtesy of Brisley's comedic own goal, with the ball slicing off the defender's boot and trickling behind him into the net.

I was struggling to come to terms with how we were 2-0 down. We hadn't done a lot wrong really

The second period lacked the drama, and mistakes, of the first, although the 10 men of Swindon looked the most threatening, going close with a Darren Ward header and a Ben Gladwin strike.

Knight-Percival should have done better when he headed over for Posh, who failed to capitalise on their numerical advantage ahead of the return fixture in two weeks' time.

The final few minutes of the game were delayed after a supporter fell ill and had to be treated at the side of the pitch, before being taken away by an ambulance.

"We couldn't have started off better. I thought we used the conditions very well with the wind with us.

"But I can't keep wanting to score three goals to win a game. The goals we gave away were really poor.

"I think we're making it really difficult for ourselves to win games because we're making individual mistakes. Perhaps it is nerves, I don't know.

"But the way we started the game should have given us more confidence."

"I thought some of the referee's decisions both ways were strange. Too many times we talk about that.

"As far as the game goes I thought we were outstanding. I thought my players were fantastic and I thought we deserved to win the game.

"I was struggling to come to terms with how we were 2-0 down. We hadn't done a lot wrong really. Peterborough hadn't worked for it - we gave them two goals.

"So you think you're in trouble but fair play to them they came back and with 10 men as well."