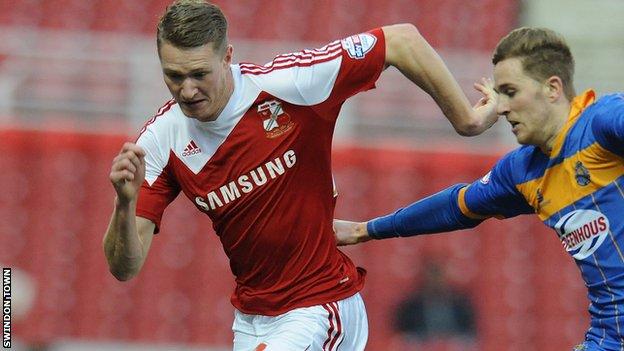 The 22-year-old striker signed from Charlton last week and has scored three goals in his first two games.

Speaking after Tuesday's 1-1 draw with Walsall, in which Smith netted the equaliser, Cooper told BBC Wiltshire: "I'm pleased he's off to a good start.

"Hopefully the fans take to him because of his work rate and desperation to make a career in the game."

Smith, who has been given a two-and-a-half year deal with Swindon, started his career at Darlington, where he played under former Quakers boss Cooper.

The forward signed for Charlton in 2011 but spent much of his spell with the Addicks out on loan at Accrington, Newport, Colchester and, most recently, AFC Wimbledon.

He impressed at the Dons - scoring 10 goals in 25 games for the League Two club - and Cooper said the player was ready to make the step up.

"I was confident he could fit into our system and that he'd give us everything he had," said the Town boss.

"I knew that he'd come in every day and make himself a better professional footballer. You can't have too many of them."