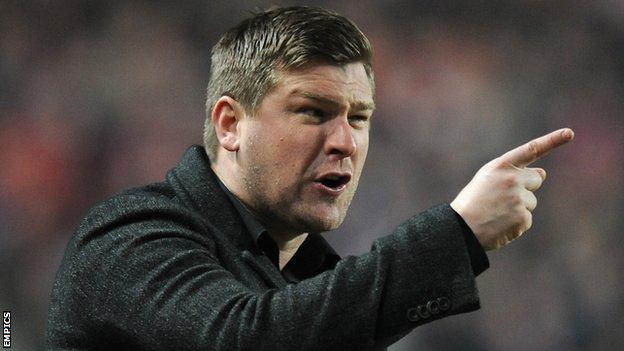 Robinson was furious with his side's performance in Cumbria, which followed

"I gave them a chance. No more. The players have no excuses. They'll have individual meetings on Wednesday," he told BBC Three Counties Radio.

"And some will be told they might have played their last game for me."

MK Dons in League One under Robinson

He added: "I can't put that team back on the pitch again together."

The Dons on Monday and have seen loan players Dale Jennings, Jordan Spence and top-scorer Patrick Bamford end their spells with the club.

And with MK having drifted 10 points adrift of the League One play-off places with just one win in six league games, supporters have called for chairman Pete Winkelman to invest more in the squad.

"We've got to use some of the money from Shaun's sale to build this team. If we don't we'll be struggling," said Robinson.

"I think the players on that pitch should have done better than they did. But I do believe we need to bring players in.

"I want to bring four in. The back four has been a shambles for a period of time, with or without Shaun.

"But that performance is not the chairman's fault or because of finances. That's the players not putting their heart and soul into it."