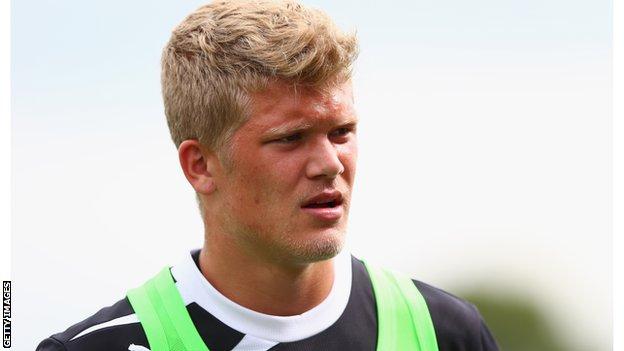 The 20-year-old striker has failed to make an impression in the Premier League and has gone back to the Danish club on a five-year contract.

The Bluebirds signed Cornelius for a then club record £7.5m in July 2013 on a five-year deal, but his start in Wales was hampered by an ankle injury.

He made 11 appearances for Cardiff this season but failed to score.

FC Copenhagen confirmed the return of the 6ft 4ins Dane, who was top scorer in the 2012-13 Danish Superliga, scoring 18 goals in 32 appearances.

I do not see it as a step back, to go to the biggest club in Scandinavia

"I have nothing bad to say about the club [Cardiff] or any of it over there, but I need to play football," Cornelius told the Copenhagen website.

"I do not see it as a step back, to go to the biggest club in Scandinavia. I feel there are many things I have not achieved with FC Copenhagen yet, and I definitely want to be part of what is being built at FCK right now.

"So now I am looking forward to working with the guys again and get on with playing football."

Copenhagen are thought to have paid in the region of just £3m for Cornelius, who is understood to have agreed to drop back down to his original salary of £6,000 per week, having been on a reported £45,000 at Cardiff.

The striker was former manager Malky Mackay's first signing after they had reached the Premier League.

It is understood that with add-ons the actual transfer fee was almost £11m and Cornelius's salary over a five-year contract, plus a £1.25m signing-on fee, meant Cardiff committed themselves to a total outlay of more than £20m.

The signing of Cornelius was among the reasons why Cardiff owner Vincent Tan sacked Iain Moody as head of recruitment in October and Malky Mackay as manager two months later.

Cornelius was highly rated in Denmark having represented his country at under-18, under-19 and under-20 before making his full international debut against the Czech Republic in September 2012.

He scored his first international goal in the 1-1 draw with Mexico on 31 January last year.

After signing for Cardiff he said: "This is a dream come true for me, I was impressed by what the club is trying to do."