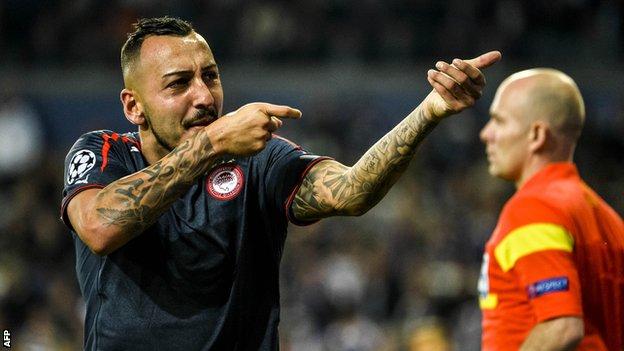 Fulham have signed Greece international striker Konstantinos Mitroglou from Olympiakos for about £11m.

The 25-year-old, who has scored 23 goals in 26 appearances for club and country this season, has signed a four-and-a-half-year deal at Craven Cottage.

But striker Dimitar Berbatov has left the club, moving to Ligue 1 side Monaco on loan until the end of the season.

"I've known him for two years and he has played at the highest level in the Champions League and scored a lot of goals for us there," Carroll, 36, told BBC Radio 5 live.

"He has been the top goalscorer in Greece for the last two years and he is hungry and passionate about his football. He can score left or right-footed and also scored against Arsenal with his head."

The Northern Irishman says Mitroglou "knows where to be in the box" and it is "very hard to get him off the ball".

He added: "Eric Cantona was a great, great player - one of the best, but Konstantinos is very strong. I remember watching Cantona on television and he was holding the ball up - that's the type of player Konstantinos is.

"Against Anderlecht in the Champions League, he had three chances and scored three goals. He just needs one chance and he scores it. Fulham need a goalscorer and they've got one."

Heitinga, meanwhile, was given permission by Everton to speak to other clubs after becoming frustrated at his lack of appearances.

"I chose Fulham because the feeling was good and what was also important was the conversation between me and Rene [Meulensteen]," the 30-year-old, who has played just five times this season, told the club's website.

"The main thing is to keep Fulham in the league and hopefully the boys will start with a win against Southampton."

The Cottagers, who have also signed Tottenham midfielder Lewis Holtby, 23, on loan for the rest of the season, are 19th in the Premier League.