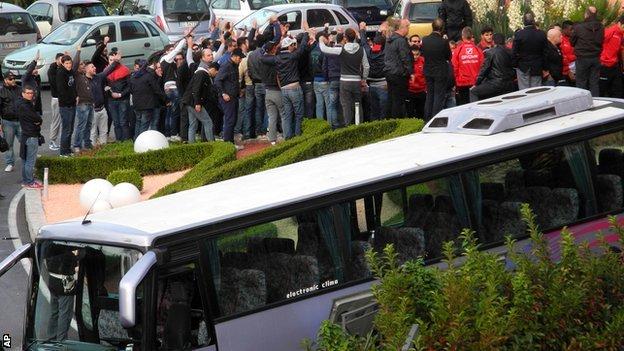 Italian side Nocerina have been thrown out of the country's third division after players faked injury during November's derby against Salernitana.

The Italian Football Federation (FIGC) took the action after Nocerina players were reluctant to play following death threats from their own "Ultras" fans.

Nocerina made three substitutions and five players went off injured as the game was called off after 21 minutes.

Fans issued the threats as retaliation for being banned from the game.

The Lega Pro group B encounter in southern Naples, called the "derby of hate" by the Italian media, had already started 40 minutes late with the Nocerina players needing to be persuaded to take the field.

The FIGC's disciplinary body also handed lengthy bans to a number of players and officials and the club were fined 10,000 euros ($13,700).

A FIGC statement read: "Nocerina have been excluded from the Lega Pro championship for sporting fraud and will be assigned by the Federal Council to one of the leagues' lower categories.

"The club has also been fined 10,000 euros. The decision comes into effect immediately and has been announced to the Lega Pro and its stakeholders."

Salernitana's club president Claudio Lotito, who holds the same position at Serie A giants Lazio, compared the Salerno derby to forcing "Israelis to take on the Palestinians".