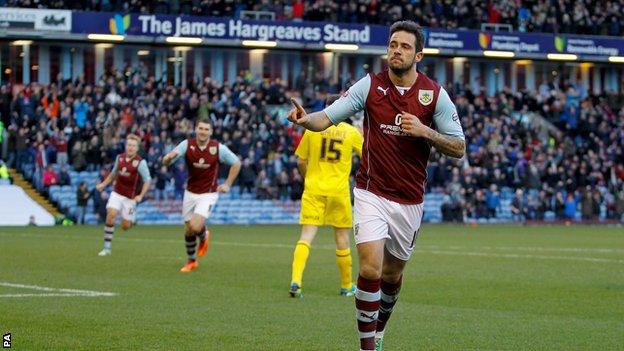 Promotion-chasing Burnley have said 21-goal top scorer Danny Ings is not for sale in the January transfer window.

Ings, 21, is rumoured to be attracting Premier League interest after a

Speaking to BBC Radio Lancashire before chief executive Lee Hoos said he is sure the will remain at Turf Moor for the rest of the season.

It is the third year in succession that Burnley have had to deal with speculation regarding one of their star players.

Jay Rodriguez was linked with moves elsewhere in January 2012, as was Charlie Austin last term. Both players left the club at the end of those seasons to join Southampton and QPR respectively.

"It worked with Jay and Charlie - we sent out the signals to say 'don't even waste your time calling us because we're just not going to hear it'," continued Hoos, who admitted that their stance on Ings could alter if Burnley fail to win promotion to the Premier League.

"A lot of things could change in the summer," he added. "Danny's just happy playing football here and I don't want to do anything to distract him. Let's see what happens between now and the end of the season."

The Clarets, who are third in the Championship, have made one signing so far in January, with

And the club are hopeful of concluding at least one more deal before the transfer deadline on Friday.

"Ashley Barnes was a good signing, especially with the amount of interest from a couple of other clubs," said Hoos. "That actually turned out to be a complicated piece of work to make sure we kept other people away.

"Whoever we bring in has got to fit in with how our group works, which is really something special."