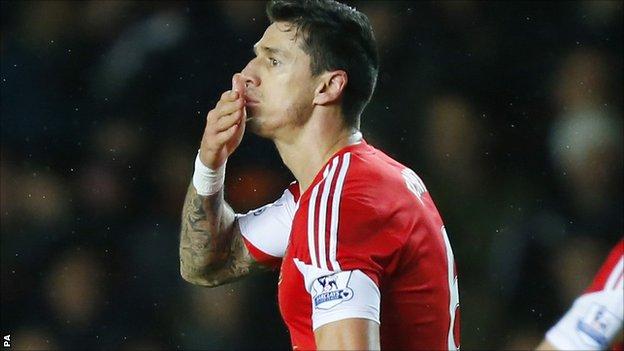 Southampton defender Jose Fonte has said he wants to move on from his "eventful" week after scoring in the club's 2-2 draw against Arsenal.

Fonte, 30, was involved in a training ground bust-up with Italian Dani Osvaldo last Wednesday, which left the Portuguese defender with a black eye.

I am man enough, I took it and I have moved on and I hope everyone can move on and focus on what is important, which is Southampton

Osvaldo was suspended for two weeks after headbutting and punching Fonte.

"What happened [at training] wasn't nice," said Fonte. "I am man enough, I took it and I have moved on."

After Fonte headed Saints in front during a dominant opening period, goals from Olivier Giroud and Santi Cazorla in quick succession turned the match on its head early in the second half, before Adam Lallana's strike ensured a point.

Fonte was roundly cheered on his return to action and said he now wanted to put the incident behind him.

"We are professional and know that we have to do a job on the pitch because this is our careers and our lives and we need to deliver," he told BBC Radio Solent.

"Credit to all the players who showed great character and great belief."

Asked how the past week has been for him personally, Fonte added: "What can I say? I'm fine.

"It has been eventful obviously and what happened wasn't nice at the training ground.

"I hope everyone can move on and focus on what is important, which is Southampton, the club and winning games of football.

"There is no problem with me, I am fine, so I just want to keep playing.

"This group is very strong mentally and the togetherness is there."