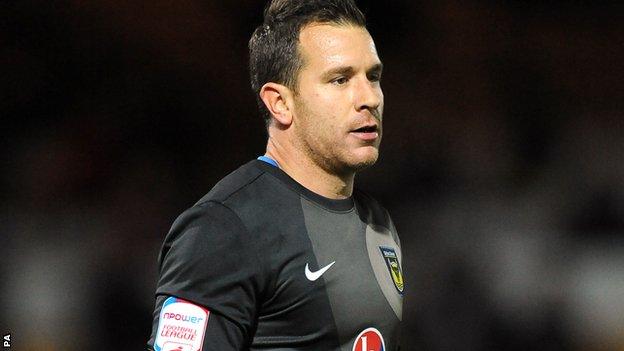 Manager Wilder left on Monday to join Northampton Town and Clarke revealed his departure had a huge impact.

Clarke, 31, was bought by Wilder in 2009 and the former U's boss later hailed him as one of his best signings.

Under the circumstances the boys have put in a unbelievable performance

"For me personally I found that the hardest game mentally of my career," Clarke told BBC Radio Oxford.

"In terms of everything that has gone on with the whole change of manager, but as a professional you have to go out and do your job.

"Our team spirit came out and it was a good point for (caretaker manager) Mickey (Lewis), (assistant) Andy (Melville) and the club.

"I was gutted obviously. He (Wilder) brought me to the club, he didn't have to. He took a chance on me and I've not looked back since.

"I love playing for this club, so of course naturally I am gutted he has gone.

"It was disappointing for everyone but we have to get on with it, and the most important thing is we get promotion and that's what we're all aiming to do.

"We've got a good team spirit and everything else will take care of itself."

The result leaves the U's in fifth place, two points off the automatic promotion places and Clarke hailed their performance.

"Under the circumstances the boys have put in a unbelievable performance," he said,

"Considering everything that has gone on this week, the way the boys have played in this match, putting their bodies on the line, it was a great way to end it with a good clean sheet which we deserved and it was a good point away from home."