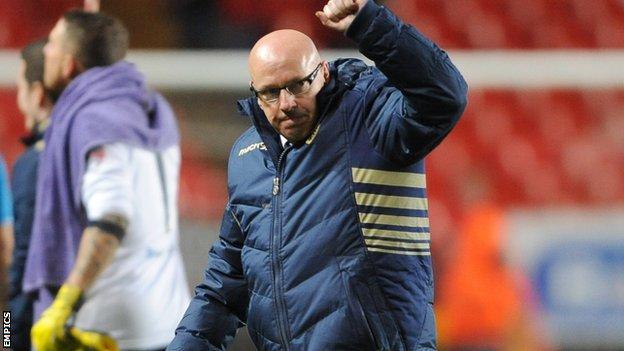 Leeds United boss Brian McDermott says the uncertainty over the club's ownership is having a negative impact on the team.

Talks about a takeover of the Elland Road club have been ongoing for weeks, with a number of different consortiums interested.

He told BBC Radio Leeds: "The football has been peripheral these last 10 days and that should not be the case.

"It's been frustrating and we don't want that filtering into the stands."

He added: "Some of the things that have gone on do not belong in football in my opinion.

"I'm not trying to hide because the results have not been good enough but to succeed you need to have things in harmony at your football club."

Leeds recorded a 1-1 draw with Ipswich on Tuesday to put an end to a run of five successive defeats in all competitions.

Winger Jimmy Kebe, who is on loan from Crystal Palace until the end of the season, conceded possession for David McGoldrick to put Ipswich ahead before skipper Ross McCormack levelled from the penalty spot.

McDermott believes the Mali international needs the fans' backing to turn his slow start at the club around after receiving criticism from some of the club's supporters.

"I know Jimmy better than anybody and it would be fantastic if he could get some real support from our crowd," the former Reading boss added.

"Jimmy is a great player but he needs that confidence and belief that the fans are with him."