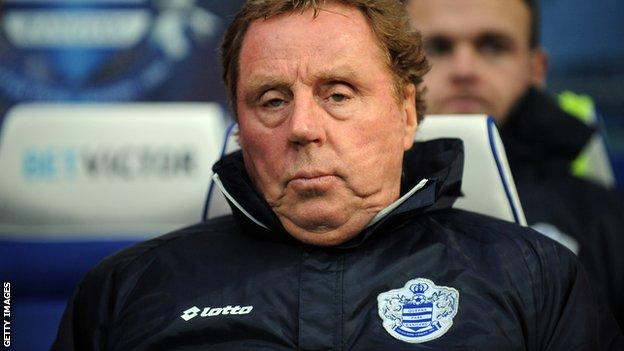 QPR manager Harry Redknapp says he must strengthen his squad to maintain their Championship promotion challenge.

Rangers moved three points clear of third-placed Burnley with a 2-1 win over Bolton on Tuesday.

"It is very fair to say we are scrambling and scrapping, picking up results without playing very fluent football," he told BBC Radio 5 live.

"We can't keep doing that. We need to bring a little bit of quality in one or two positions to make the difference."

He added: "We looked a bit disjointed again.

The last thing where you want to be [is] in a position where you are trying to bring people in on Friday. I don't need that really. I'd rather train and go home

"We had a spell earlier on in the season where we were playing some great football. Recently they have been scrappy games but we have been coming out on top."

"It's difficult," he explained. "I had to play Benoit [Assou-Ekotto] at right-back. He's not a right-back but I've got no-one else.

"We are short. People think you have a strong squad. Danny Simpson is out for months, Nedum Onuoha has got a knee problem. We are very, very short in certain areas of the team.

"We have had long-term injuries with [Jermaine] Jenas, Joey [Barton] is out and Yossi Benayoun."

The west London side held talks with Livingston defender Coll Donaldson earlier this week and are also looking to boost their forward line.

Inter Milan striker Ishak Belfodil, France Under-21 forward Paul-Georges Ntep and St Johnstone striker Stevie May have all been linked with a move to QPR.

With a 12:15 GMT kick off against Burnley on Saturday, Redknapp is eager to complete any transfer business well ahead of the deadline on Friday evening.

"The last thing where you want to be [is] in a position where you are trying to bring people in on Friday," Redknapp said. "I don't need that really. I'd rather train and go home.

"I wish we had a squad here where everybody was fit and we didn't need to bring anybody in. We do need to get one or two in, for sure."