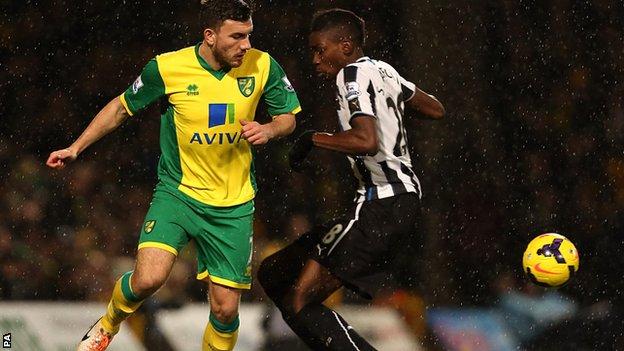 Norwich club captain Russell Martin has defended Robert Snodgrass after he reacted to taunts from supporters.

Snodgrass was angered by criticism from the stands in the first half of but applauded the same section of fans at full-time.

Martin told BBC Radio Norfolk: "He cares a lot. He's a winner. He means nothing by it and has apologised.

"They were chanting his name at the end. They were great. All is well and good and we move on."

Norwich have only won one of their past eight Premier League games and are 12th in the table.

In a frustrating first half for the Canaries, winger Snodgrass was berated by fans behind him after failing to find a team-mate with a corner, and the 26-year-old Scotland international turned to engage in a verbal exchange.

"I felt it. The crowd were getting tense," said Martin, after a game that saw Norwich improve in the second half and secure a point towards their fight against relegation.

"Sometimes it's hard for players, especially Snods, who is on everything - free-kicks, corners. For him to be bang on the money all the time is tough.

"I feel for him at times because if it's not on the money, people criticise him. There were some sarcastic cheers when he put a cross in and that's not doing anyone any good."

Snodgrass joined Norwich from Leeds in 2012 and has scored nine goals in 60 games for the Norfolk side.

Earlier this month, defender who held up a banner calling for boss Chris Hughton to be sacked.