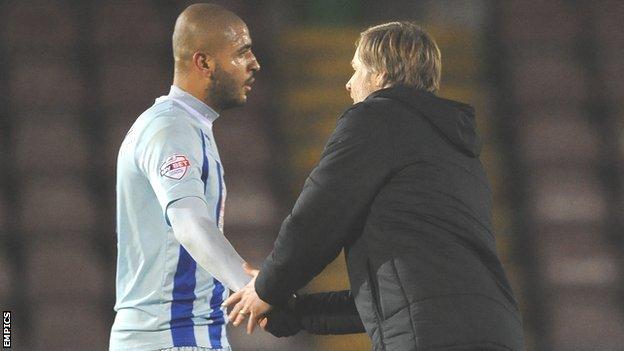 Coventry City manager Steven Pressley admits that he feels "let down" by Leon Clarke as he prepares for the departure of his 18-goal top scorer before the close of the January transfer window.

Clarke, 28, who has twice been the subject of bids from City's League One rivals Wolves, missed the Sky Blues' 2-0 defeat at Orient on Tuesday night.

"We were obviously let down by an individual," Pressley told BBC Sport.

"It now looks more likely that he'll leave - that he gets his wish."

"Make no mistake, he will be a star for this club in the future. But we're asking a lot of a boy of his age.

"When you go from having the two top scorers in the league to having no strikers it's very difficult.

"That's not making excuses. It's my job to find a way and I'm trying desperately to do that.

"This group of players have given me everything. I cannot tell you how much they've given to this football club.

"But we need help. We need to get certain personnel in. We need strikers. They've been let down. That's why I'm angry.

"This football club has helped him to get to where he is.

"I understand that sometimes players leave football club. But there's a way to leave. Of course, that's football, but it's not what I agree with."

Pressley, who has already been linked with a move for young Aston Villa striker Nathan Delfouneso (back from loan at Blackpool), has made it clear that he will be happy to get Clarke's expected departure over and done with - and that it has not affected the spirit in the City dressing room.

"Not at all," he added. "The morale will be better, but it's a difficult period right now."