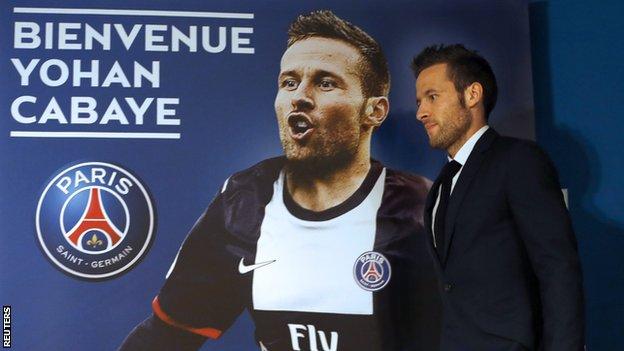 The Ligue 1 champions had a £14m bid for Cabaye rejected on Sunday but returned with a larger offer, which could rise beyond £20m with add-ons.

The 28-year-old, who has agreed a three-and-a-half-year contract, completed a medical on Wednesday.

"I was won over by the ambitious project at Paris St-Germain," said the France international, who will wear the number four shirt.

"I can't wait to join this exceptional squad and help the team reach its objectives in France and in Europe."

Cabaye in the Premier League

The former Lille player joined Newcastle for £4.3m in June 2011 and scored 17 goals in 79 appearances for the North East club.

He refused to play for the Magpies in August after they rejected a £10m offer from Arsenal, but later apologised and in September insisted he was "happy" at the Premier League club.

PSG are three points clear of AS Monaco in Ligue 1, and will face Bayer Leverkusen in the last 16 of the Champions League.

"The transfer of Yohan Cabaye is further proof of the club's capacity to attract the best French and overseas players," president Nasser Al Khelaifi said.

"We are especially delighted to welcome him to the Paris St-Germain family to help it in its upcoming challenges in the second half of the season."

Since their arrival, the club have spent more than £200m on signings, with Uruguay striker Edinson Cavani joining from Napoli last summer for £55m.