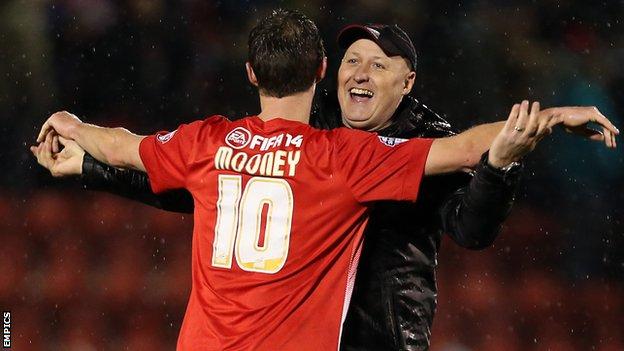 Leyton Orient boss Russell Slade says his side cannot relax if they are to stay in the automatic promotion race.

The O's have won all four League One games this calendar year and are currently two points behind table-toppers Brentford, with a game in hand.

"We are doing everything we possibly can and we can't ask for any more," Slade told BBC London 94.9.

"It is a momentum thing and [about] that will to keep going. We need to be relentless in everything we do."

He added: "Eventually you will get your rewards."

The club is going in the right direction. We have just got to keep it going, which is the trick, but it is not easy

Top scorer David Mooney, returning from a one-month injury lay-off, scored the second goal as Orient beat Coventry City 2-0 on Tuesday to maintain their 100% start to 2014.

Goalkeeper Jamie Jones and forward Shaun Batt are still absent through injury, but Slade has bolstered his squad this month with four loan signings and the capture of ex-Barnsley striker Chris Dagnall.

The Brisbane Road outfit have been in the thick of the promotion race since starting the season with eight successive victories.

"I have always believed," Slade said.

"We are serving up some really good football and the fans are right behind us.

"The club is going in the right direction. We have just got to keep it going, which is the trick, but it is not easy.

"I say it almost flippantly but it is a test and a challenge.

"We haven't got over-confidence or egos. We have got a good group with a great attitude.

"We may lose because we are not good enough or a bit of quality beats us. It is going to happen from time to time but you have got to be happy with three defeats in 27."