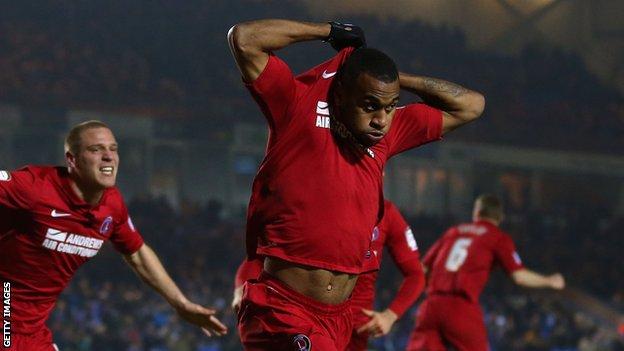 Notts County forward Danny Haynes is on his way to Scotland to join Hibernian on loan.

The English League One club confirmed to BBC Scotland that the 26-year-old is heading for the Scottish Premiership club for the rest of the season.

Haynes, who can play on the wing or up front, after leaving Charlton Athletic.

He has made 23 appearances for County this season, scoring four goals.

Now on route to Scotland. Off on loan to Hibs for the rest of the season

However, he has not found the net since October, has not started for the Magpies since early December and was placed on the transfer list by manager Shaun Derry earlier this month.

Haynes, who began his career with Ipswich Town and has also played for Millwall, Bristol City and Barnsley, said on social media site Twitter: "Now on route to Scotland. Off on loan to Hibs for the rest of the season."

Hibs manager Terry Butcher has been looking to add to his forward line during January and failed in an attempt to sign Adam Rooney, who was with him at Inverness Caledonian Thistle.

after his release by another League One outfit, Oldham Athletic.

Paperwork for Haynes' move to Easter Road is not expected to be completed until Thursday.

Haynes has found himself mainly on the bench since Derry took over as County boss in November.

As Derry this month as they attempt to move clear of the relegation zone, the manager said that Haynes needed to find a new club to resurrect his career.

Should the Londoner complete his move to Easter Road, he will become the second County striker to head for Scotland's top flight as Derry re-structures his squad.

after the Magpies cancelled the Martinique international's contract and he scored when making his debut in a 3-0 win over Dundee United.