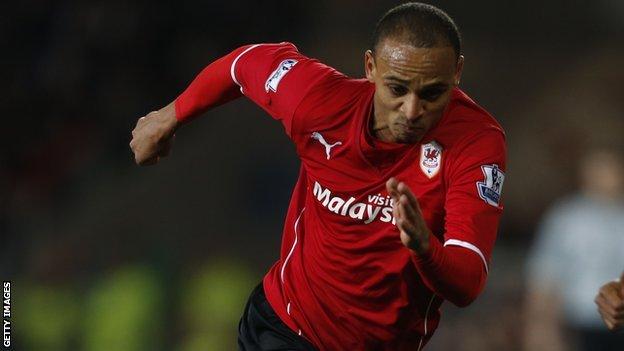 Nigeria striker Peter Odemwingie has described his transfer from Cardiff to Stoke as "a step forward for me".

The 32-year-old joined the Potters on Tuesday in a swap deal that took Kenwyne Jones to the Welsh club.

Odemwingie told BBC Sport: "Stoke have a strong squad and I'm looking forward to contributing as much as possible.

"I'm particularly excited at the prospect of working under [Stoke manager] Mark Hughes and I'm delighted he was really keen to bring me over."

Odemwingie struggled to produce his best form at Cardiff after joining from West Brom in September 2013, and found himself out of favour under new Bluebirds boss Ole Gunnar Solskjaer.

Scored only twice in 17 appearances

He has also been absent from Nigeria's squad since 2012, missing his country's successful Africa Cup of Nations campaign at the start of last year.

Odemwingie admits he has not had "an easy last 12 months" and is keen to reignite his career at the Britannia Stadium.

"I just want to enjoy my football again and try to help my team-mates," he said.

"A happy striker is one that loves scoring goals. I am ready to start afresh and very positive that I can be that happy striker again."

With Nigeria coach Stephen Keshi keen to reshuffle his team as he explores options ahead of this summer's World Cup in Brazil, Odemwingie is hopeful he can secure an international recall.

"A good performance at club level will make a strong case, but realistically I just need to hit scoring form and take it one step at a time," he added.

"It's unwise to distract yourself by focusing on what could be when you can concentrate and achieve success with what's directly in front of you."