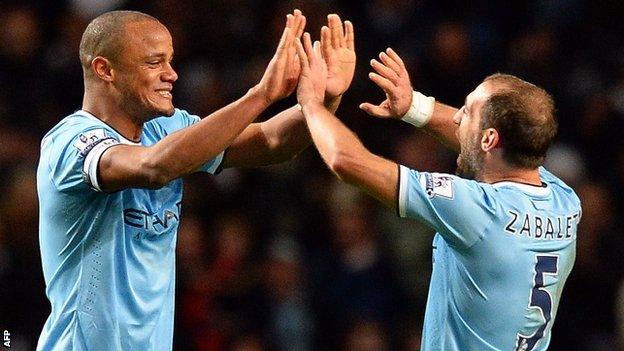 City have posted a net loss of £51.6m, down from £97.9m, but remain confident Uefa will not punish them despite exceeding the £37m threshold.

If a club fails to meet FFP they could be banned from the Champions League.

So what are the implications?

Following these results, City are now confident of meeting Uefa's FFP guidelines - despite missing the £37m threshold for acceptable losses.

The first FFP reporting period is due to end in May this year. Uefa says it is prepared to punish those clubs who fail to abide by the strict criteria and it is being billed by some as a test of the body's resolve.

As with all things financial-related, the devil is in the detail. Intriguingly, City made £47m from the sale of "intellectual property" to "related" and "third" parties - without that income the losses would have been higher and being FFP compliant a much tougher task.

As it is, despite finishing over the £37m figure, City are confident their spending on youth development and infrastructure - which is exempt for FFP accounting purposes - will enable them to comply.

But City expect once cash spent on youth development and facilities, which is exempt from the FFP calculation, is included they will be under the limit.

Uefa has introduced a cap to the amount a club is allowed to lose in order to create a more level financial playing field.

City's financial report for 2012-13 reveals the club, who were Premier League champions in 2012, generated an annual turnover of £271m, the second-highest in the league.

City chairman Khaldoon Al Mubarak said there was a "renewed sense of confidence for the future", with success on and off the pitch having generated "significant commercial opportunities for the organisation and underpinned a strong momentum for the years ahead".

They lie two points adrift of leaders Arsenal but can go top if they win at Tottenham on Wednesday.

Chief executive Ferran Soriano said: "Growing revenues and controlled expenses are bringing the club to breakeven in the immediate future and profitability thereafter."

City have extra income to look forward to this season from new commercial contracts, a further boost of about £25m from the new Premier League TV deals, as well as more cash from the Champions League having qualified for the knock-out stages for the first time.

Manuel Pellegrini's team have also reached the final of the League Cup and are through to the fifth round of the FA Cup.