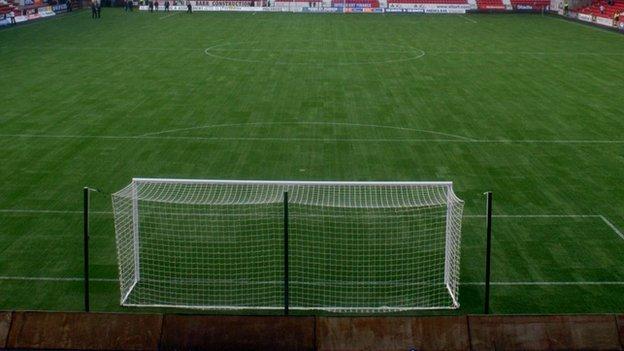 Conference clubs have voted against a plan to permit the reintroduction of artificial surfaces.

They pitches were outlawed from English professional football in 1995 after four clubs - QPR, Luton Town, Oldham Athletic and Preston North End - tried them during the 1980s.

But the issue now has been raised by reformed Maidstone United's success on a 3G pitch in the Ryman League Premier.

Their current pitch would be banned if they win promotion to the Conference.

Following an Extraordinary General Meeting in Telford on Wednesday afternoon, a Conference statement said: "The vote by the member clubs in compliance with competition regulations saw the proposal defeated by 21 votes to 11 votes.

"This means for the 2014-15 season only natural grass turf surfaces will be permitted in all three divisions of the Conference."

Artificial pitches are commonplace on the continent, with the top flight of Italian, Russian and Dutch football all hosting games on them.

Rugby union sides Saracens, at their new Allianz Park home, and Cardiff Blues, at the old Arms Park, have both installed artificial surfaces.

But, with memories of the bouncy plastic pitches of the 1980s still fresh, Football League clubs last voted against artificial pitches three years ago,