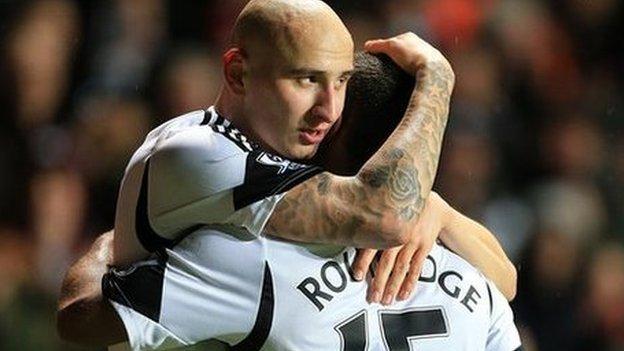 Jonjo Shelvey believes that manager Michael Laudrup's sense of calm has rubbed off on his Swansea squad.

The midfielder opened the scoring in Tuesday night's a result that ended an eight game winless run.

The pressure had built on Swansea during that barren run, which had seen the Welsh side drop to within touching distance of the relegation places.

"I think we've got the right manager to help us stay calm," Shelvey said.

"You know what he's like, he's a very calm person and has obviously been in situations much bigger than this so he'll help us."

"But I don't think we've been feeling the pressure, you look around the place and it's so relaxed.

"It's the same atmosphere I came into at the start of the season so, personally, I don't feel any pressure here.

"I'm the type of character that thinks you have to stay cool, there's no point getting nervous because it's not going to help you."

Shelvey's goal and a later one from Chico Flores that sealed the result against Fulham both took big deflections on their way into the net, but Shelvey believes that Swansea were due some good fortune.

"To be fair you need a bit of luck in football and I don't think we've had that too much of late," Shelvey added.

"We never seem to get a tap-in, it's always got to be a wonder goal or we have to pass it into the net.

"We needed a bit of luck and perhaps this is a sign we're going to start getting it."

Swansea go to West Ham on Saturday in the league, before facing Cardiff at the Liberty Stadium the following weekend in the south Wales derby.