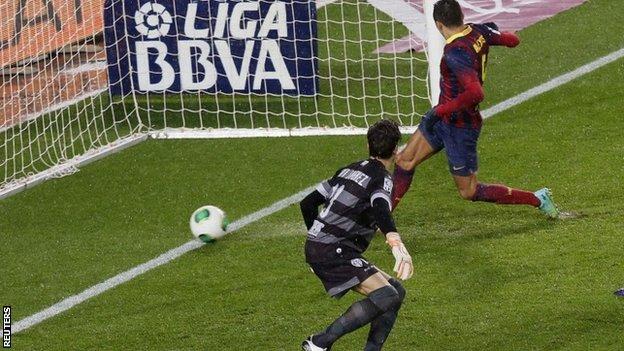 Barcelona cruised into the Copa del Rey semi-finals with a 5-1 second-leg victory over Levante to win 9-2 on aggregate.

Sergi Roberto scored a surprise goal early on for the visitors but Barca led at the break following goals from Adriano and Carles Puyol.

Alexis Sanchez scored twice after the break and Cesc Fabregas added a fifth with 23 minutes left.

Barca will play either Real Sociedad or Racing Santander in the last four.

Those two play their second leg on Sunday, with Sociedad 3-1 up from their first meeting.

Barcelona won the first leg thanks to a Juanfran own goal and a Cristian Tello hat-trick, with each of his three goals set up by Lionel Messi.

Messi was an unused substitute for the second leg.

The other semi-final will be a