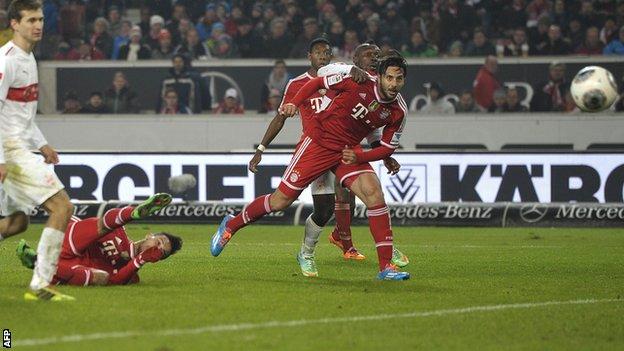 Thiago Alcantara hit an acrobatic injury-time winner as Bayern Munich came from behind to beat Stuttgart and go 13 points clear in the Bundesliga.

The summer signing from Barcelona stunned the hosts with a scissor kick in the third minute of stoppage time.

Stuttgart excelled in the first half, taking the lead through Vedad Ibisevic.

Claudio Pizarro levelled with 14 minutes left, before Thiago struck as Bayern extended their record unbeaten run in the league to 43 games.

1 June: Became the first German side to win the Treble with a 3-2 German Cup final win against Stuttgart

The fixture at Mercedes-Benz Arena had been rearranged for after the winter break to cater for Bayern's successful Fifa Club World Cup campaign.

Pep Guardiola's side have been in imperious form since the Spaniard joined the Treble winners last summer, but the disparity between the teams was not apparent in the early stages as mid-table Stuttgart started the brighter.

After having penalty appeals waved away for a Rafinha handball, Die Roten deservedly went in front when Ibisevic fired in from close range, though Mohammed Abdellaoue appeared to be offside when he deflected the ball to the Bosnian.

Jerome Boateng had to clear Rani Khedira's volley off the line as the home side continued to enjoy the better chances in the second half, before the Bundesliga champions showed their class.

First Thiago's free-kick gave Pizarro the chance to head home the equaliser, before the former Barcelona man produced another moment of inspiration as Bayern claimed their 16th top-flight win in 18 games this season.