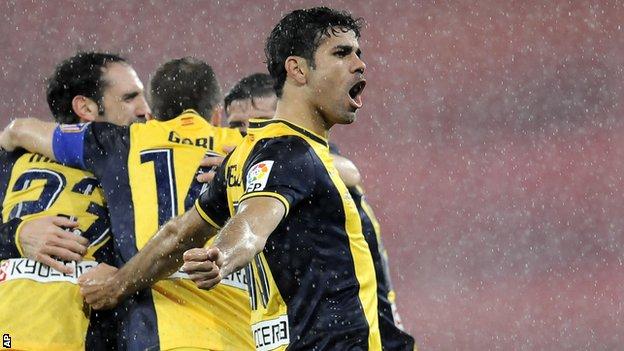 Bilbao levelled the tie at 1-1 as striker Aritz Aduriz powered in a deserved goal late in the first half.

Atletico recovered after the break, and equalised on the night through Raul Garcia's forceful strike.

Diego Costa then slotted in his first goal of 2014, to secure a cup derby with Carlo Ancelotti's Real.

The two Madrid sides played out a heated final last season, in which Cristiano Ronaldo was sent off as Atletico claimed a memorable triumph.

On-loan Chelsea goalkeeper Thibaut Courtois had to be at his best in the opening period as Bilbao went ahead on the night through Aduriz's effort.

But La Liga title contenders Atletico improved after the interval, in the process inflicting their opponents' first ever defeat at at their new San Mames ground.

in the other semi-final.